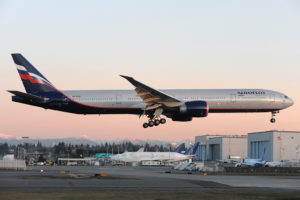 During the reported period the company transported 23 million people, increased its capacity by 18.8% on international routes and by 11.9% on domestic routes, but also succeeded to reduce the costs.

“In the first half of 2017 Aeroflot continued operating growth, as we transported 23.0 million passengers, which is 16.6% more than for similar The period of the last year. The Group increased its capacity by 18.8% on international routes and by 11.9% on domestic routes, while the percentage of passenger seats increased by 2.0 percentage points to 80.6%”, said the Deputy General Director for Commerce and Finance of PJSC Aeroflot, Shamil Kurmashov. “Against the backdrop of the growth in operating indicators, the Group’s revenue showed positive dynamics, which increased by 4.9% to 234.9 billion rubles. The main growth is related to the passenger transportation segment. At the same time, the growth rates of revenues turned out to be lower than the growth rates of operational indicators, which is explained by the fluctuation effect of foreign exchange earnings, which determined a decrease in income rates on international flights and other revenues denominated in foreign currency”, added he.

Operating expenses also increased against the backdrop of the growth in the volume of transactions, in contrast to the past periods, when the rate put pressure on such items as operational leasing, maintenance, airport fees abroad, in this reporting period the strengthening of the ruble had a positive impact on operating expenses. The cost of 3.08 rubles per chair-kilometer was decreased by 0.30 rubles per seat-kilometer operating program, which is approximately 10% of unit cost. However, the increase in the cost of aviation kerosene by 10%, as a result of the increase in oil prices, did not allow Aeroflot to get all the benefits from the ruble strengthening.

Total debt as of June 30, decreased by 9.1% compared to end of 2016 and amounted to 130.751 billion rubles. The reduction in the debt burden is associated with the repayment of loans and borrowings, both planned and early, with a reassessment of financial lease obligations due to the strengthening of the ruble. Despite significant payments, the amount of cash and short-term financial investments increased more than 2 times compared to end of 2016 to 88.133 billion rubles. As of June 30, 2017, the volume of non-selected limits for credit lines available to the Aeroflot Group in the largest Russian and international banks amounted to 92.8 billion rubles.