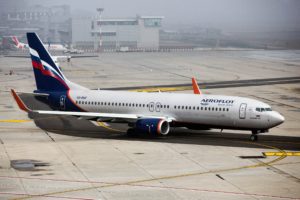 The revenue of the Russian airline Aeroflot increased by 6.2% during the period January-September 2017, amounting to 404.77 billion rubles (6.92 billion USD). The company benefited from the traditional strong season for the Russian aviation industry, reporting growth in passenger traffic amid increased transportation capacity.

“The Aeroflot Group successfully completed the traditionally high season for the Russian aviation industry”, said the Deputy Director General for Commerce and Finance of PJSC Aeroflot, Shamil Kurmashov. “In the third quarter of 2017, the Group showed high growth in passenger traffic amid increased transportation capacity. For the nine months of 2017, we transported 38.3 million passengers. The development of the international transit segment continues due to the growth of flight frequencies in key areas”, added he.

In Kurmashov’s opinion, the financial results of the nine months and the third quarter of 2017 reflect the normalization of the level of profitability and the effect of a number of market factors that previously had an impact on the results of the first half of the year. The volume of the capacitive supply on the market and the exchange rates declined the incomes compared to the same period last year, when there was a significant imbalance in supply and demand.

On the other hand, the rising cost of fuel, the dynamics of which returned to normal only during the third quarter, and the pressure from labor costs and investment in product quality, made a major contribution to the growth in operating costs, in addition to growth associated with an increase in operations and development.

“It is necessary to note the positive trend of the third quarter compared to the first half of the year: there is a slowdown in the rate of decline in the revenue rate for regular flights (a decrease of 4% versus 8%), as well as the cost of jet fuel, which in the first half grew by 10%, and in the third quarter remained at a level comparable to last year”, said also the Deputy Director General for Commerce and Finance of PJSC Aeroflot. “The exchange rate also provided support for operating expenses: if last year the rate exerted pressure on such items as operational leasing, maintenance, airport fees abroad, then in the reporting period the strengthening of the ruble had a positive impact on operating expenses”, added he.

PJSC Aeroflot is the flag carrier and largest airline of the Russian Federation. The carrier is an open joint stock company that operates domestic and international passenger and services, mainly from its hub at Sheremetyevo International Airport.