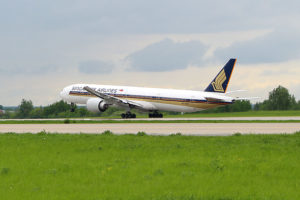 The revenue of the Singapore Airlines Group increased by 265 million SGD (196.3 million USD), or 6.5% YoY, in the third quarter of the 2018-2019 fiscal year to 4.342 billion SGD (3.216 billion USD). The strong finance results growth was achieved primarily due to an increase in traffic revenue and an increase in passenger demand.

The passenger traffic of the Singapore Airlines Group grew by 8%, which exceeded the growth rates of the carrying capacity and contributed to an improvement in the load indicator by 0.9% to 83%. The revenue per seat-kilometer increased by 1.3% as a result of the transformation program of the group.

“Revenue from freight traffic remained at the same level as last year. The result of the third quarter was affected by the growth of the income rate by 3.4% on the one hand and a decrease in the volume of transported goods on the other. The engineering division of the Group showed an increase in revenue of 16 million SGD (+14.2%), primarily due to an increase in the volume of routine maintenance of aircraft”, says the statement of Singapore Airlines Group.