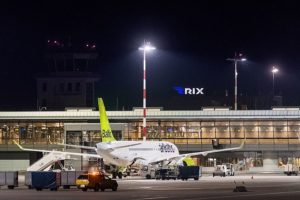 Riga International Airport plans building of a new terminal worth 14.782 million EUR, which will be fifth for the airport. The airport has announced a tender for the construction of a terminal, the applications for which are accepted until November 5. The contractor will have to build it within 17 months.

Riga International Airport is the largest air hub in the Baltic States. Last year, the airport handled 6.097 million passengers, which is 12.9% more than in 2016.

Moreover, the expansion of the landside part of the passenger terminal planned within the framework of Riga International Airport development stage 6 will be a modern and multifunctional passenger service complex that will be connected to Rail Baltica railway station. The complex will feature a spacious and modern check-in hall and security control area, offering new shopping opportunities, cafes and restaurants. The complex will also have a spacious luggage reclaim hall and highly functional luggage sorting premises.

Riga International Airport is the largest airport in the Baltic states with direct flights to 100 destinations in 30 countries. It serves as a hub for airBaltic, SmartLynx Airlines, RAF-Avia and as one of the base airports for Wizz Air. The Latvian national carrier airBaltic is the biggest in the airport, followed by Ryanair.