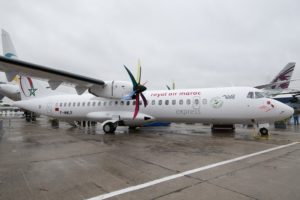 Moroccan national air carrier Royal Air Maroc will acquire another ATR 72-600 aircraft. Thus, the total fleet of ATR 72-600 will reach six aircraft. The aircraft will be delivered to the airline by the end of the year and will be equipped with a two-class passenger cabin.

ATR 72 is a twin-engine turboprop, short-haul regional airliner developed and produced in France and Italy by aircraft manufacturer ATR. ATR 72-600 series aircraft was announced in October 2007, while the first deliveries were planned for the second half of 2010. The ATR 72–600 features several improvements. It is powered by the new PW127M engines, which enable a 5% increase in takeoff power via a “boost function” used only when called for by takeoff conditions. The flight deck features five wide LCD screens (improving on the EFIS of earlier versions).

Royal Air Maroc, commonly known as RAM, is the Moroccan national carrier, as well as the country’s largest airline. It is fully owned by the government of Morocco and has its headquarters on the grounds of Casablanca-Anfa Airport