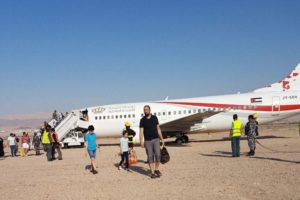 Boeing 737 of the Jordanian charter airline Royal Wings suffered damage after runway excursion during landing at the airport in the resort city of Aqaba in the south part of the kingdom. Fortunately there were no reported injuries during the incident. The aircraft Boeing 737 was performing a flight from capital of Jordan Amman to Aqaba with 126 passengers on board. The airplane landed, but failed to stop on the paved surface of the runway and went to a soft ground. The passengers were disembarked onto soft ground via stairs and were transported by busses to the terminal.

After landing in Aqaba the plane was scheduled to continue flight to Dubai, which was cancelled because the aircraft received separate external damages.

A source in the administration of the international airport of Aqaba explained that after landing the plane “could not brake in the proper place, it rolled out beyond the runway and stopped on soft ground”. According to him, an investigation is underway into the causes of this air accident.

The liner passengers were accommodated in the Aqaba hotel prior to the arrival of another aircraft.

Boeing 737 is a short- to medium-range twinjet narrow-body airliner. The 737 is Boeing’s only narrow-body airliner in production, with the 737 Next Generation (-700, -800, and -900ER) and the re-engined and redesigned 737 MAX variants currently being built.