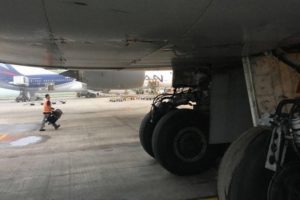 Fortunately there were no reported injuries during the accident and all the passengers were disembarked at the terminal.

The investigation for the root cause of the accident was initiated. The aircraft remained on the ground in Sao Paulo for about 86 hours. After repairs and safety inspection the aircraft was allowed to return in service.

The traffic on the runway was suspended for a while during inspection for the debris of the burst tyre.

The Boeing 747 is an American wide-body commercial jet airliner and cargo aircraft, often referred to by its original nickname, “Jumbo Jet”. Its distinctive “hump” upper deck along the forward part of the aircraft has made it one of the most recognizable aircraft, and it was the first wide-body airplane produced. Manufactured by Boeing’s Commercial Airplane unit in the United States, the 747 was originally envisioned to have 150% greater capacity than the Boeing 707, a common large commercial aircraft of the 1960s.