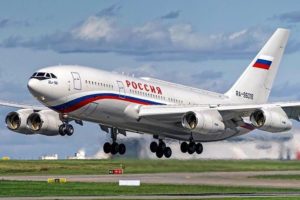 More than 20.8 billion rubles (316 million USD) will be allocated from the federal budget-2018 for the renewal and modernization of the fleet of the Special Flight Group Russia, which is the structure of the Presidential Administration of the Russian Federation for air transportation of the country’s top officials.

The number and types of aircraft that are planned to be purchased / upgraded for the Special Flight Group Russia are not specified in the note. The press service of the Office of the President’s Affairs refused to clarify this information, citing confidentiality.

At the same time, it follows from the explanatory note that Rostec will act as the recipient of subsidies for the renewal of the fleet. The property contribution to the state corporation for exactly the same amount – 20.817 billion rubles. The amount it provided “for the purpose of ensuring particularly important and special flights of aircraft”, says the document.

The main presidential aircraft is the four-engined, wide-bodied, long-haul airliner Ilyushin Il-96-300PU, a highly modified Il-96, with the two last letters standing for “Command Point” in Russian. The jet is equipped with an advanced communication system that allows it to act as a management centre capable of commanding troops in case of unexpected attack.