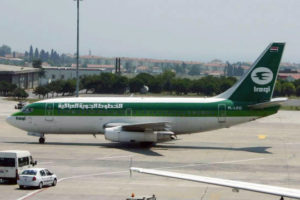 Russia and Iraq resumed direct air links after 13-year break due to the deterioration of security in the Middle East. An Iraqi airplane flew from Baghdad at 10.31 local time and will land at Vnukovo Airport in Moscow at 14.19 am, released information of the Russian airport. The two countries have been in talks since 2014, planning to resume regular flights. Direct air links were severed at the start of the US-led operation against Suddam Hussein and his government

Only the Baghdad-Moscow air connection has been restored so far, but it is possible for both sides to start flights to Basra in southern Iraq.

Passengers will be able to travel twice a week, with flights to and from Baghdad operating on Wednesday, and flights to Basra on Sunday.

Russia suspended its air trade relations with Iraq in 2004 because of the deterioration in security in the country following the overthrow of Saddam Hussein by the US-led coalition.