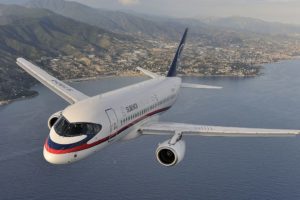 Russia and Italy prepare bilateral agreement on maintaining the airworthiness of the SSJ100. The aviation agencies of both countries signed the Schedule of Procedures how to implement the bilateral agreement and receive certification of the aircraft for European Union.

“In accordance with the document, National Civil Aviation Administration of Italy (ENAC) freely accepts the export certificate of the airworthiness of the RRJ-95 aircraft issued by Russian aviation. In addition, the document regulates the issues of the supply of components for the aircraft, as well as the interaction of the Federal Air Transport Agency and ENAC in the exchange of information relevant to the production aspects”, says the report.

The signing of this document supersedes the previously implemented Schedule of Implementation Procedures signed between ENAC and the Federal Air Transport Agency in 2013. The new Schedule of Procedures fully provides the necessary list of procedures for the SSJ100 in accordance with EU Regulation No 216/2008 in a new version.

“In the development of long-term and effective Russian-Italian cooperation in the field of domestic aircraft deliveries to European markets, Rosaviatsia and ENAC signed an important document – Schedule of Procedures for the implementation of the bilateral agreement to maintain the airworthiness of the SSJ100. We succeeded in coordinating our positions and preparing the text of the Procedures in a very short time – less than two years”, said the head of the Federal Air Transport Agency, Alexander Neradko. “From now on, our relations have been further formalized. The signed document strengthens bilateral cooperation, fully meets the interests of the Russian aircraft industry and is the key to the successful development of domestic aircraft exports abroad”, added he.

In particular, to promote the project of supplying the SSJ100 aircraft to the European market, implemented with the participation of the Italian side, in 2016-2017, cooperation was established with the National Civil Aviation Administration of Italy (ENAC).

On November 6, 2017, in order to ensure the supply of Sukhoi SuperJet aircraft to Italy for customization and subsequent transfer to European customers, as well as following the provisions of the 1989 Agreement, Rosaviatsia and ENAC, as competent airworthiness agencies, signed the Schedule of Procedures for the implementation of the bilateral agreement to maintain the flight the suitability of the SSJ100 (RRJ-95B).