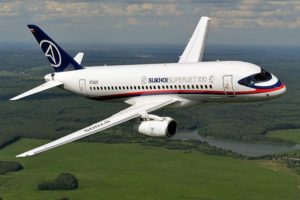 The Russian Sukhoi SuperJet 100 plane landed at Tehran’s Mehrabad airport on Monday morning and was inspected by Iranian aviation experts, who will have to decide on the possible purchase of this type of aircraft.

“The Russian manufacturer of this aircraft asked Iran for permission to fly to the airport of Mehrabad on the way back from the Singapore air show”, said the representative of the Association of Iranian Airways Magsud Asadi Samani said to the publication as part of the process to obtain Iran’s approval for the purchase of Sukhoi SuperJet 100 aircraft.

Referring to previous talks with Sukhoi Civil Aircraft (Sukhoi SuperJet 100 aircraft), an Iranian official explained that the Russian company had announced that it would sell its aircraft to Iran in the event of obtaining a license from the Office of Foreign Assets Control (OFAC).

“As for the changes made to the Sukhoi SuperJet 100 design, then, because less than 10% of its current configuration consists of US units and parts, there is no need for an OFAC solution”, said Magsud Asadi Samani. “The Sukhoi SuperJet 100 can be used to develop Iran’s air fleet if the Iranian Civil Aviation Organization (CAO) approves its purchase after taking the necessary examinations”, added he.

The Sukhoi Superjet 100 is a fly-by-wire twin-engine regional jet with 8 (VIP) to 108 (all economy) passenger seats. With development initiated in 2000, the airliner was designed and spearheaded by Sukhoi, a division of the Russian civil aerospace company (UAC), in co-operation with several foreign partners. Its maiden flight was conducted on 19 May 2008. On 21 April 2011, the Superjet 100 undertook its first commercial passenger flight, on the Armavia route from Yerevan to Moscow.