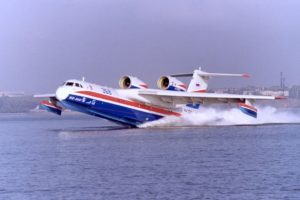 The production of aircraft Beriev Be-200 can be localized in China, according to the Director General of Taganrog Aviation Scientific Production Complex, Yuri Grudinin. The management of the Beriev Aircraft Corporation (part of the United Aircraft Corporation), together with Rosaviation and Chinese aviation authorities, apply for the validation of the certificate of the type of Beriev Be-200 aircraft in China.

“It was decided in principle to promote the Be-200 aircraft in this region, especially since Taganrog Aviation Scientific Production Complex has already signed with the Chinese Energy Aircraft Manufacturing Co contract for two Be-200s with an option for another two aircraft. Against the backdrop of the active interest of the Chinese side in the future, the possibility of localizing production in China is not ruled out”, said Yuri Grudinin, stressing that the issue requires careful consideration by the Russian authorities.

Beriev Be-200 multipurpose amphibian aircraft for fighting fires, emergency situations, search and rescue on water, sanitary and freight traffic. In 2017, the plant plans to produce four aircraft, while in five years production will be increased to six aircraft per year.

In 2016-2017, the Russian and Chinese sides signed a number of agreements on the licensing of the light amphibious aircraft Beriev Be-200, the creation of a service center for maintenance and schools for training flight and technical personnel in the PRC. According to Grudinin, the demand for this aircraft in China is estimated at more than 200 units.

“In the current situation, the Chinese are not inclined to make one-time purchases. They are not interested in it. They are trying to develop their industry, loading the capacities of their enterprises. There is a certainty that after they fulfill the contract for the Be-200 they will want to localize its production”, says a top manager in the industry.

Beriev Be-200 Altairis a multipurpose amphibious aircraft designed by the Beriev Aircraft Company and manufactured by Irkut. Marketed as being designed for fire fighting, search and rescue, maritime patrol, cargo, and passenger transportation, it has a capacity of 12 tonnes of water, or up to 72 passengers.