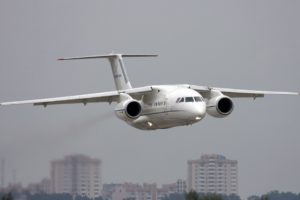 Russia suspends its participation in the production of the Russian-Ukrainian regional passenger plane An-148 after the completion of the last two machines.

“Unfortunately, politics proved to be stronger than the brains and the previous regime of relationships, so the last batch of this machine is finished in Voronezh, and the future development of the An-148 project in Russia will be suspended”, said Rostech in a statement.

The development of the regional passenger aircraft An-148 was made in Kiev and production was organized by Ukrainian license in Voronezh aircraft factory and Kiev aviation plant Aviant.

In 2016, following the rupture of the connections and cooperation between the suppliers from Russia and Ukraine, was produced no aircraft from the family of An-148 nor its modification with increased passenger capacity – An-158. In February of this year it became known that Antonov will continue the production of the aircraft by replacing the Russian equipment involved with similar parts by Ukrainian and Western companies.

Earlier this year, there were rumors about the plans of the Russian military ministry to buy a batch An-148 to replace obsolete Tu-154 and Tu-134. It was about a dozen machines, and there are currently 10 such aircraft operated, according to available information. However, following the latest suspension of cooperation between Russia and Ukraine in building this airplane, the deal will not be concluded.

The partial cessation of An-148 production can be offset by the deployment in Russia of the production of airplanes with regional scope and smaller dimensions based on IL-114. It was decided to completely modernize the model, and after two years the aircraft will start to fly, satisfying the needs of airplanes with 60-65 passenger seats, says the representative of Rostech.

Antonov An-148 is a regional jet airliner designed by the Ukrainian Antonov company and produced by Antonov itself and also on outsource by Russia’s Voronezh Aircraft Production Association. The An-148 has a maximum range of 2,100–4,400 km (1,100–2,400 nmi; 1,300–2,700 mi) and is able to carry 68–85 passengers, depending on the configuration. The Antonov An-158 is a stretched fuselage version of the aircraft, accommodating up to 99 passengers.