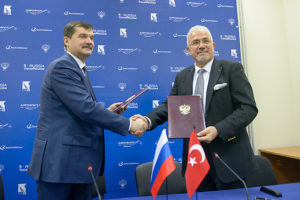 The Russian Federal Air Transport Agency and the General Directorate of Civil Aviation of Turkey signed a working agreement in the field of airworthiness and aviation equipment certification. The signing of the agreement took place within the framework of the National Exhibition and Forum of Civil Aviation Infrastructure NAIS – 2018.

The agreement was signed by the head of the Federal Air Transport Agency Alexander Neradko and Deputy Director General of the General Directorate of Civil Aviation of Turkey Kan Erel.

Within the framework of the agreement, the Russian and Turkish aviation authorities will be able to legalize the cooperation of the two countries in the field of certification of aircraft, aviation products, as well as developers and manufacturers of aviation equipment.

The Russian Federal Air Transport Agency noted that these agreements will be signed with all countries that have firm contracts for the acquisition of Russian aircraft. To obtain a list of states, the agency sent a request to the Ministry of Industry and Trade.