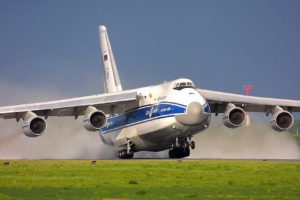 The conflict between Russia and Ukraine over the extension of the airworthiness of aircraft An-124-100 can unexpectedly be resolved peacefully.

Caught in a deadlock following the results of mutual threats, the parties nevertheless began closed negotiations on the resumption of cooperation. As a result, the Ukrainian state enterprise Antonov may agree to extend the airworthiness of the aircraft of the Russian company Volga-Dnepr although the cooperation of the countries in the aviation industry is demonstratively interrupted after the accession of the Crimea. In exchange, Kiev can obtain documentation for the extension of the Il-76 aircraft resource. However, the agreement risk of failing if the Ukrainian government puts political expediency above common sense.

The fact that the Russian cargo airline Volga-Dnepr and the Ukrainian state enterprise Antonov are conducting closed negotiations on the extension of the airworthiness of the An-124-100 aircraft.

Both sides are interested in reaching agreements, but the final decision has not been made yet due to the complicated relationship between the two countries, according to officials from the industry. While there is an understanding of the cost of services and the place of work: a brigade of the Ukrainian enterprise will deal with them at the Aviastar-SP plant in Ulyanovsk.

Recall, the aircraft manufacturer Antonov, by order of the Government of Ukraine, withdrew from the Ukrainian-Russian JV “UAC-Antonov” in September 2015. The Ministry of Economy of Ukraine then explained that further participation in the joint venture is impractical due to the suspension of work on joint projects. In January 2016, the enterprises that were part of the Ukrainian concern were transferred to the management of Ukroboronprom. The conflict not only stopped promising joint projects, but also created serious difficulties for the Volga-Dnepr company with the extension of the resource and ensuring the life cycle of the aircraft An-124-100 Ruslan. In the fleet of carrier there are 12 aircraft An-124-100, which carry out charter cargo transportation. But the holder of the aircraft-type certificate, developed in the USSR, remains Antonov. Under its terms, the procedure for extending the resource should be made every 4,000 flight hours, although the designated resource itself is much larger – 50,000 hours.