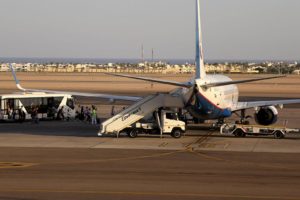 The final visit of Russian aviation security inspectors to Egyptian resort airports, scheduled for late February, was postponed for spring due to technical reasons.

“Unfortunately, the Russian air safety inspectors could not visit the airports of Hurghada and Sharm el-Sheikh at the end of February. The visit had to be postponed due to technical reasons”, says the official statement of the Russian authorities.

Russian aviation experts are expected to visit Egypt in the spring.

“We expect the Russian side to re-send aviation security experts to the airports of Hurghada and Sharm-al-Sheikh so to be satisfied that there are no threats to the air passengers at these airports”, commented Egypt authorities.

Earlier it was reported about the plans of Russian experts on aviation security to visit Egypt in late February. At the same time, in Egypt, they assured the Russian side of the effective work of the new security systems of the two resort airports.

“A lot of work has been done on the entrance groups, as well as at the entrance to the so-called sterile zone, modern inspection equipment has been installed that meets international safety requirements for air passengers. Airport personnel has received the necessary training to work with this equipment”, said a representative of the Egypt authorities. “However, in order to fully verify this, the Russian side will conduct a final verification of the equipment and aviation security services at the airports of Hurghada and Sharm al-Sheikh”, added the representative.

On April 11, 2018, Russia resumed its flight connection with Egypt after more than two years of interruption caused by an investigation into the crash of the A321 airliner over the Siny Peninsula. So far, flights are operated by Aeroflot and Egypt Air only between Moscow and Cairo.