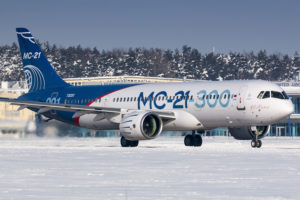 “I will note that since the start of testing the MC-21-300 aircraft 148 flights have already been carried out. The portfolio of firm orders formed by Irkut Corporation amounts to 175 aircraft, and additional requested have also been received”, said Yury Borisov.

He added that the airline Aeroflot, which has already signed a contract for the supply of 50 aircraft, is considering the possibility of buying another 35 planes.

MC-21-300 is a new generation passenger aircraft with a capacity of 211 passengers. The airliner is more environmentally friendly than Airbus and Boeing, its carbon dioxide and nitrogen emissions are lower.

The main advantage of the new aircraft is efficiency. The heavy-duty composite wing can significantly improve aerodynamics, which reduces operating costs by 12-15% compared with competitor aircraft.