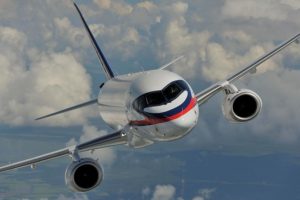 The Russian aircraft SSJ 75 will be launched by 2024. It will be a modification of the SSJ 100 aircraft with an increased share of Russian components. This was stated by Deputy Minister of Industry and Trade of the Russian Federation Oleg Bocharov.

The United Aircraft Corporation is postponing the implementation period of this project.

According to Bocharov, the aircraft SSJ 75 is a project of an import-substituted plane and not a shortened with 75 seats. In the basic version of the Super Jet aircraft – 98 seats.

“The plane was not built under 75 seats, this is a provisional name. It was import-substituted with a new PD-8 engine”, explained Oleg Bocharov.

According to Bocharov, simultaneously with the import substitution of components in the SSJ, other aircraft problems will also be resolved, including on system reliability and airworthiness.

At the beginning of 2018, the then president of Sukhoi Civil Aircraft (produced by SSJ) Alexander Rubtsov reported that the development of the SSJ 100R modification had begun, which implies an increase in the share of Russian components to 50-60%.

The Sukhoi Superjet 100 is a modern fly-by-wire twin-engine regional jet. The airliner was designed and spearheaded by Sukhoi, a division of the Russian civil aerospace company (UAC). Its maiden flight was conducted on 19 May 2008. Commercial passenger flights began in 2011. The flight range of the basic version is 4,400 km, capacity – 98 passengers.