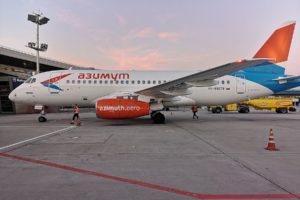 Thus, the passenger traffic of Azimuth in the current year is expected to almost double to the level of the previous year.

At the same time, he stressed that the airline’s fleet consists of Russian-made Superjet 100 aircraft. The company operates flights mainly between Russian cities, as well as to Bishkek (Kyrgyzstan) and Yerevan (Armenia).

“As for Bryansk, the flight to Krasnodar and the flight to Sochi, which is scheduled to open from May 1, will be year-round”, added Oleg Dyshkant.

Azimuth Airlines is a Russian airline based in Platov International Airport in Rostov-on-Don, the capital of Rostov Oblast.