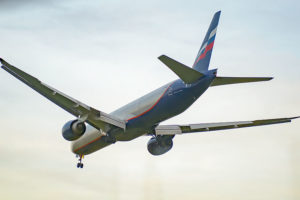 “The growth in operating indicators resulting from the development of the network and the replenishment of the aircraft fleet was accompanied by landmark strategic events”, said the Deputy General Director for Commerce and Finance of Aeroflot PJSC, Andrey Chikhanchin. “Aeroflot Airlines transferred its domestic flights to a new modern terminal at Sheremetyevo Airport, which made it possible to improve the quality of service on the ground”, added he.

The most significant factors affecting the Group’s financial results in 2018 were the unprecedented high growth of the average cost of kerosene, as well as the weakening of the ruble exchange rate. The growth of the cost of kerosene for the Aeroflot Group was 36%, which, when consumed, led to additional expenses in the amount of 48 billion rubles.

The depreciation of the ruble in a situation where almost half of the Company’s expenses are nominated in foreign currencies created additional pressure on financial results.

In these conditions, in addition to the already existing, a special optimization program was launched to increase efficiency and reduce costs. The focus of the program was not only direct cost reduction, but also the active capacity and revenue management. This program showed its high efficiency: unit costs, with the exception of fuel per kilometer-seat, increased only by 0.8% despite the growing exchange pressure on currency items of expenditures.

The low season of the fourth quarter was characterized by the high cost of kerosene and the excess capacity in the market. Correction of oil prices was reflected in the cost of kerosene only in December, but this effect was limited, and the average price of kerosene was still at a level higher than last year. At the same time, the exchange pressure on operating expenses in the fourth quarter did not weaken, but on the contrary, increased. These factors account for the increase in loss in the final quarter of the year. Thus, despite a record increase in the cost of kerosene, accompanied by the devaluation of the ruble, thanks to a large-scale optimization program, the Group managed to make a profit for the year in the amount of 5,713 million rubles.

In addition, according to the materials of the company, the total debt as of December 31, 2018, decreased by 6.8% compared with the figure as of December 31, 2017, and amounted to 97.618 billion rubles. The reduction in debt burden is associated with a decrease in financial lease obligations due to the phased withdrawal of 11 aircraft and the transfer of several aircraft to resale assets. As of December 31, 2018, the amount of unselected limits on credit lines available to the Aeroflot Group in the largest Russian and international banks amounted to 84.2 billion rubles.