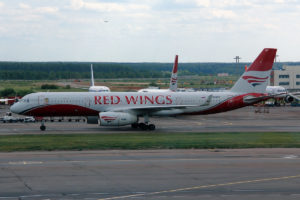 The Russian airline Red Wings canceled an order for six Airbus A220-300 aircraft (ex Bombardier CS300) since these aircraft were not certified by Rosaviation for use in Russia.

According to the publication, the decision of Rosaviation was a response to the failure of the Canadian Civil Aviation Directorate, also known as Transport Canada Civil Aviation, to issue a certificate to the Russian SSJ 100 aircraft and the Ansat helicopter.

The aircraft Airbus A220-300 should have been delivered to the carrier by the Russian State Transport Leasing Company (STLC). They say that the increased price of the aircraft was the reason for the cancellation of the contract, which led to an increase in the leasing rate. STLC said that they will sell the six aircraft. They will look for buyers in Europe.

CEO of the Russian airline Red Wings, Eugene Klyucharev, confirmed that the carrier had to “withdraw from the project”, refusing to give a reason. He noted that due to the refusal of the Airbus A220-300, the company will not be able to open several routes this year.