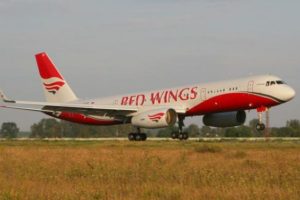 Shareholders of the Russian airlines Red Wings and Smartavia denied merger into a single holding company.

“The question of the merger at the point of ownership is rejected. All aspects of interaction are joint management”, adds the statement of the airlines.

The main shareholder in Smartavia is the businessman Sergey Kuznetsov (through Sky Invest holding). Part of the shares is held by the carrier’s managers.

Red Wings is 100% owned by the leasing Ilyushin Finance (part of UAC), and Sergey Kuznetsov is also the owned the asset. At the end of 2017, it became known that the shareholders of Red Wings and Nordavia decided to create an aviation holding company under common management. Now they have a single route network and an aircraft fleet.

“In fact, one team manages two airlines. Shareholders understand the need for consolidation, especially in the current market. Therefore, companies both worked in the alliance and will continue to work”, said the CEO of the airlines, Eugene Klyucharev. He noted that by the end of 2018, both companies had received a net profit – albeit symbolic of what was expected. “There were completely objective factors in the form of kerosene and airport taxes”, added Eugene Klyucharev.

The head of the Red Wings abstained from forecasting the financial results of the alliance in 2019. Passenger traffic will be more than 5 million people.

“Last year we transported 3.8 million people, this year we will break the figure of 5 million and thereby come close to 4-5% of the capacity of our Russian market”, said Eugene Klyucharev.

The total Red Wings and Smartavia fleet will include more than 30 aircraft by the middle of the summer season. Now the Red Wings fleet consists of 12 A320 aircraft, while Smartavia has 11 Boeing 737.