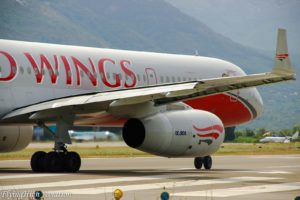 Red Wings passenger airplane Tu-204 landed by emergency after one of its engines caught fire during flight. The aircraft was flying from from Ufa to Sochi with with 215 passengers and 7 crew, but was forced to return shortly after takeoff. The reason was a fire in the left engine. The terrified passengers caught the flames on video on their mobile phones.

The Red Wings airplane made an emergency landing at Ufa airport where firefighters extinguished the flames and passengers were evacuated with inflatable emergency slides.

The incident went without serious injuries. The local authorities initiated investigation for the root cause of the accident.

Rosaviatsia (Russia’s Civil Aviation Authority) reported during the takeoff run the left hand engine (PS-90A) was surging, during climb out the tower informed the flight crew about fire from the left hand engine. The crew however did not receive any fire indication and the automatic fire suppression system did not work. The crew shut the engine down and engaged the fire suppression manually. Emergency services needed to put out the fire after landing, the passengers were evacuated through the right hand (emergency) doors via slides.

The Tupolev Tu-204 is a twin-engined medium-range jet airliner capable of carrying 210 passengers, designed by Tupolev and produced by Aviastar SP and Kazan Aircraft Production Association. First introduced in 1989, it is intended to be broadly equivalent to the Boeing 757, with slightly lower range and payload, and has competitive performance and fuel efficiency in its class. It was developed for Aeroflot as a replacement for the medium-range Tupolev Tu-154 trijet. The latest version, with significant upgrades and improvements, is the Tu-204SM, which made its maiden flight on 29 December 2010.