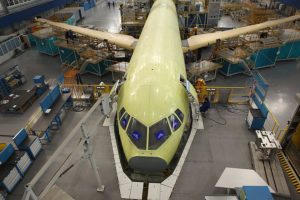 The Russian Ministry of Industry and Trade expects to receive domestic and European certificates for the Irkut MC-21 aircraft in 2020, revealed the head of the ministry Denis Manturov at the exhibition LIMA 2019.

“Next year we expect to receive a Russian and European certificate in order to start the delivery of the aircraft to our customers, including foreign ones, in early 2021″, said Denis Manturov, answering the corresponding question.

According to him, Russia is successfully implementing an import substitution program in terms of creating composite materials to create a unique wing for the Irkut MC-21. He stressed that materials are temporarily purchased in Southeast Asia, but the problem will be solved soon.

“We are completing the testing of a new wing”, stressed Denis Manturov. According to him, it will not greatly affect the timing of production of the aircraft.

“I don’t think that this will complicate our production component. Yes, we will go to the right for about six months, but we will definitely not return to the old suppliers”, added Denis Manturov.

According to him, on failure to supply, suppliers lose about 2 million USD per aircraft.