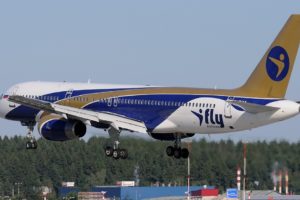 The Russian authorities investigate the CEO of iFly, Evgeny Filatov, for giving 2.1 million rubles in bribes to the Deputy Head of the Transportation Regulatory Directorate of the Federal Air Transport Agency for issuing permits for one-time flights.

The Director General of the airline iFly is accused of committing a crime, as provided for by part 5 of article 291 of the Criminal Code of the Russian Federation. The criminal case with the approved indictment was sent to the court for consideration.

The CEO of iFly, Evgeny Filatov, was arrested in July 2018.

According to the investigators, in 2017-2018, the head of the iFly airlines transferred 180,000 rubles (2,700 USD) to an employee of Rosaviatsiya every month in order to obtain permits for charter flights. The court freezed the manager’s assets worth 27 million rubles (403,000 USD), and the perpetrators are placed in custody.

In addition, the investigation charged the employee of the Federal Air Transport Agency (Rosaviatsiya) with taking bribes (part 6 of article 290 of the Criminal Code of the Russian Federation). He is arrested, the investigation against him continues.