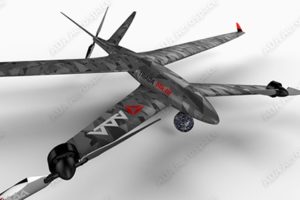 Russian engineers built a new unmanned aerial vehicle (UAV) convertible plane. The new drone is able to fly 300 km with a load of 15 kg, even in strong wind, rain or snow.

The current quadcopters, which are used for sowing fields, monitoring construction work or video surveys, have two significant negatives – a short range and dependence on weather conditions. They are not adapted to fly in the wind or rain, are very limited in time and, accordingly, the distance of the flight, as they spend a lot of energy on movement. The airplanes are capable to fly more but need an airfield for takeoff and landing.

In an effort to get rid of these shortcomings, designers have long been developing models of UAVs, which are a hybrid of an airplane and a helicopter. The most widespread convertibles. Such devices rise vertically in the air, using the helicopter mode, and horizontally fly “in an airplane” mode. This scheme provides maximum performance of the UAV.

Russian developers have patented the technology and built a new type of convertiplane – Triada Mk. III, having advantages in relation to already existing hybrid schemes.

“This is a new generation device, created primarily on a high-quality and reliable domestic element base”, said Alexander Milevsky, the founder of ADA Aerospace. “It combines almost all the achievements of our team. Designed for full autonomy in service and is able to perform a wide range of tasks”, added he.