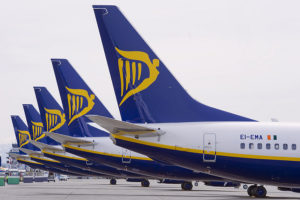 Irish budget airline Ryanair has reached a preliminary agreement with the German trade union of its pilots VC on improving salaries and increasing the pension contributions that the union has been seeking.

The pilots’ trade union said it was planned to sign a detailed multilateral agreement on improving working conditions in March, and before that time it would not hold protest actions, including strikes. The trade union VC became the first in Ryaniar, which organized a pilots strike a year ago.

After that, the Irish company experienced several larger protests, which caused criticism of the company’s management. Tense relations with the union of pilots threatened to turn into a strike on Christmas Eve, which could bring the airline new multi-million losses.

Ryanair DAC is an Irish low-cost airline founded in 1984, headquartered in Swords, Dublin, Ireland, with its primary operational bases at Dublin and London Stansted airports. Ryanair operates more than 400 Boeing 737-800 aircraft, with a single 737-700 used primarily as a charter aircraft, but also as a backup and for pilot training. The airline has been characterised by its rapid expansion, a result of the deregulation of the aviation industry in Europe in 1997 and the success of its low-cost business model. Ryanair’s route network serves 35 countries in Europe, North Africa (Morocco), and the Middle East (Israel and Jordan).