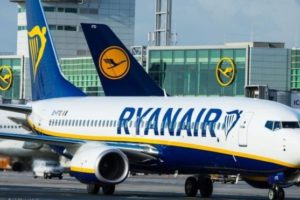 Irish low-cost airline Ryanair announced it would cancel 190 flights due to cabin staff strikes planned for Friday (September 28th) in a number of European countries. That’s about 8% of all 2,400 flights scheduled for that day.

“Ryanair apologizes to 30,000 of its customers, who will be affected by these unjustified violations on Friday, September 28”, said the company in official statement.

Airline officials in Spain, Belgium, the Netherlands, Portugal, Italy and Germany are expected to join the strike. In Belgium and the Netherlands, cabin crew will also strike together with pilots.

Negotiations in Germany, Portugal and Spain continue. The company has faced labor disputes in a number of countries since negotiations last at the end of last year with the cabin crew. The employees of the most profitable European airline, which overturned the market, insist on higher pay and better working conditions. Above all, it criticizes the fact that in individual countries Ryanair often does not treat its employees under national law and does not conclude local contracts with them.

Ryanair appealed to the EU regulators for competition, according to which rival companies are behind these coordinated protest actions. The company is disappointed that the German Cockpit trade union, which joins the strike, noting that there has been progress in talks on Tuesday, including the appointment of a mediator.