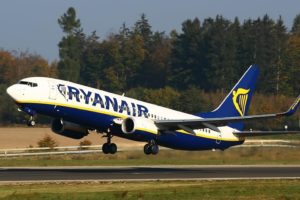 Irish budget airline Ryanair asked European Commission and the German Antimonopoly Service (Bundeskartellamt) to take measures to block German airline Deutsche Lufthansa AG from potentially taking over Air Berlin. According to the management of Ryanair, the bankruptcy procedure launched by Air Berlin will allow Lufthansa to acquire Air Berlin with the funds allocated to the company by the state and increase the market share from 68 to 95%, which will lead to tariff growth.

“The German Bundeskartellamt and the European Commission should block this anti-conspiracy between the government of Germany, Lufthansa and Air Berlin”, said the CEO of Ryanair, Michael O’Leary. “Given that the German government is decisively involved in these maneuvers (having provided a loan of 150 million EUR), the German Bundeskartellamt may be afraid to apply measures to regulate competition. In this regard, it is necessary that the European Commission take urgent and decisive measures to protect Germany’s consumers from the monopoly of Lufthansa with its high fees”, added he.

Ryanair said the German carrier’s insolvency had been “set up” to allow Lufthansa to take over a “debt-free” Air Berlin, which would be in breach of German and EU competition rules.

The Irish carrier’s commercial officer, David O’Brien, has said former German flag-carrier “will probably succeed” in buying the most attractive parts of its smaller rival, reiterating Ryanair’s view that the process is a “stitch-up” which would lead to Lufthansa growing its share of the total German market to 60% from 47% currently.

On August 15, Air Berlin announced the beginning of a preliminary bankruptcy procedure. Then the main competitor of the air carrier in Germany – Lufthansa – intended to acquire a stake in the company and its divisions.