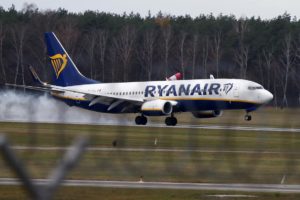 Ryanair Boeing 737-800 diverted to Paris-Beauvais Airport after developing engine problems. The plane was performing flight FR7411 from Faro Airport in France to Eindhoven Airport in the Netherlands, but shortly after takeoff the crew initiated a descent and declared an emergency. The pilot diverted to Paris, which was the closest airport and landed safely 43 minutes after the descent was commenced. Fortunately, there were no reported injuries during the incident. After landing the passengers were disembarked at the terminal and boarded to replacement aircraft.

According to the unofficial information, there was a loss of oil pressure of the right-hand engine (CFM56) that had to be shut down.

There was considerable panic on the plane during the incident. The investigation for the root cause is underway.

A passenger on the flight stated that the pilot reported a loss of oil pressure of the right-hand engine (CFM56) that had to be shut down.