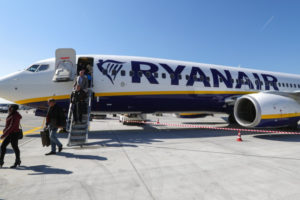 Ryanair called for restrictions on the sale of alcohol at airports. The airline offers setting a limit of two drinks per passenger and a total sale ban at 10:00 in the morning.

The request came after a flight from Dublin to Ibiza had to land extraordinary in Paris on Saturday due to three drunk passengers, which had misbehavior. They were detained by the French police.

“It is the duty of airports to introduce these preventive measures to curb the excessive use of alcohol and the problems it creates. Instead of solving the problems, they allow the passengers to get drunk before their flights”, says the statement of Ryanair, adding that it is “unfair to airports to obtain the profits from the sale of alcohol and to let airlines deal with the consequences”.

Ryanair is the largest low-budget airline in Europe. It carries 130 million passengers per year and operates 2,000 flights per day from 215 airports across Europe and North Africa. Profit after tax for the last financial year rose 10% to 1.45 billion EUR.