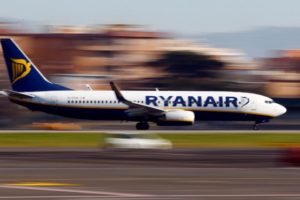 The largest European low-cost airline Ryanair has promised Thursday its pilots a significant improvement in pay and conditions, saying it would overtake wages paid by rivals and improve job security. The Irish airline has announced in recent weeks the cancellation of thousands of flights, saying there are not enough pilots in the standby mode to ensure the smooth running of its schedule. The move has sparked the anger of the company’s customers and a wave of negative media reactions in Europe.

The trade unions have said that in recent months a significant number of pilots have left Ryanair for more secure contracts, better pay and better conditions in competing airlines.

During the week, Belgium and Italy said they would sue the airline by blaming it for unprofessional behavior after flights cancellations.

Last week, Ryanair said the allegations of shortage of pilots are untrue, adding that less than 260 out of 4,200 pilots have left this year and the company is in the process of recruiting another 650.

The Chief Executive Officer of the airline, Michael O’Leary, sent a three-page letter to the pilots, promising “significant improvements of schedules, pay, base, contracts, and career advancement over the next 12 months”. The letter says that the company will “beat” the wages and security of the other operators of Boeing aircraft, such as Jet2 and Norwegian Air Shuttle.

Michael O’Leary reiterates his promise to increase pilots’ pay by between 5,000 and 10,000 EUR per year on four key bases and to negotiate increases with pilots from other bases. He also promises a loyalty bonus of between 6,000 and 12,000 EUR for pilots who will still be in the company after 12 months. He also adds a new proposal, according to which contracts must be in line with local conditions when they are different from Irish, on which all Rynair pilots work.

Changes in timetables mean that “your weekends will really be for rest”, added CEO of Ryanair.

The conditions correspond to the requests made in a letter from pilots from several of Ryanair’s 86 bases last month. Although the company does not recognize unions, pilots use social networks to organize in recent months.