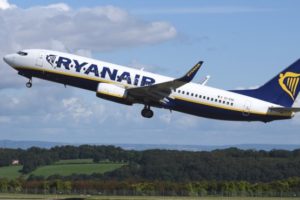 The Irish low-cost airline Ryanair will face new massive strikes in Europe, continuing mobilization of the Irish pilots continue to join their Swedish counterparts, and strike threats were also made in Germany and the Netherlands.

On Friday, the pilots of the airline in Ireland will strike for the fourth time, forcing the management to cancel 20 of the planned 300 flights during the day, or a total of 7%. The canceled flights will affect 3,500 passengers, who have been offered an alternative solution. About 25% of pilots in the country are part of the strike.

The Irish pilots, who have already been striking three days in July, are pushing for better working conditions.

The strike was continued after last week Ryanair decided to punish protesters by reducing their flights from Dublin in the winter of 2018. The management plans to transfer its aircraft to Poland, which could lead to the reduction of 300 employees – 100 pilots and 200 cabin crew.

The Irish pilots received support from their Swedish counterparts who announced a strike for August 10th.

The protest will include about 40 pilots from the airport in Skavsta, southwest of Stockholm A communique of the union mentions the permanent refusal of the leadership to meet with the negotiators. Ryanair is also faced with the threat of strikes by German and Dutch pilots, who have not yet submitted a staggered notice. The Dutch pilots offered to support the strike of their Irish counterparts and 99.5 per cent of them voted for strike action.

In Germany, the airline pilots voted by 96% to support a strike, but gave Ryanair time to negotiate and reach an agreement by August 6th. Some 400 pilots of the airline are based in Germany, which represents about 10% of the total pilot workforce.

Last week, the low-cost company faced an unprecedented strike of its cabin staff in four European countries – Spain, Italy, Portugal and Belgium. The group continues to criticize labor protests and warns that it may be forced to cut flights and jobs.

Problems in the airline emerged after the complications of pilots’ planning in September 2017, which led to a heavy labor dispute and the cancellation of a total of 20,000 flights in the coming months.

The crisis forced Ryanair to turn 180 degrees and start negotiations with the unions in several countries after refusing to recognize the trade unions.

Because of the crisis, the Group Chief Executive Michael O’Leary dropped his bonus for 2018, which could reach 1 million EUR due to the company’s good results.