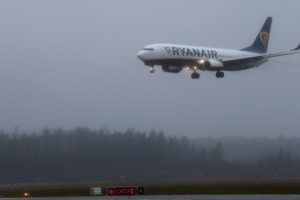 Air traffic was slightly disturbed this morning by the strike of the Irish low-cost airline Ryanair in Germany, announced last night by the trade union on the eve of Christmas holidays. The Ryanair’s first strike was scheduled from 05.00 to 09.00 local time on all flights of the company from German airports as part of the ongoing dispute over working conditions.

For the time being, it has no impact on the flights of the low-cost company at Frankfurt Airport, where six flights were scheduled for this period.

Four Ryanair aircraft flew from Berlin-Schoenefeld. Two more are scheduled for the strike period, one of which is delayed.

Last night, Ryanair’s management called for passengers to go to the airport, promising that no flights will be cancelled.

After the frustrating talks, Cockpit trade union called for strike action of some 200 pilots on a permanent contract with Ryanair in Germany to address all connections provided at German airports during the protest period. The strike is expected to affect twenty flights, of which eleven at Berlin-Schoenefeld Airport.

Faced with massive protests in Europe, the airline made a turn-around last Friday and expressed readiness to recognize unions faced with unprecedented strikes by pilots in Italy, Ireland and Portugal.

Yesterday the company managed to avoid the imminent danger of a strike in its own country by officially recognizing the Irish union Impact as a representative of its Irish pioneers in the talks, but failed to avoid the strike in Germany.