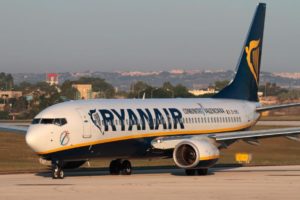 The Irish low-cost airline Ryanair launches direct flights to Ukraine in the autumn of 2018, revealed the senior manager in the airline Juliusz Komorek. The air carrier plans to open direct flights simultaneously to Kyiv and Lviv.

“It’s a realistic timeline, and I hope that this will happen. The details of the agreement are being agreed upon”, said Juliusz Komorek in an interview, specifying that the routes announced last year will be amended. Concerning the future routes to and from Ukraine, Juliusz Komorek said that they would not coincide with those announced last spring, when the arrival of the low-cost airline in Ukraine was first announced. “There will be some changes in this timetable, but the flights from Ukraine to Poland will be definitely launched”, added he.

Earlier, the Ukraine’s Infrastructure Minister Volodymyr Omelyan says the official presentation of Ryanair’s flight timetable will be held in the upcoming weeks. Last year, Ryanair announced the opening of 11 flights from Kyiv and Lviv. According to Ryabikin, the agreement with Ryanair would, therefore, be financially unattractive for the enterprise and refused to sign it unless the company’s requirements were taken into account.

Ryanair is an Irish low-cost airline, headquartered in Dublin, Ireland. In 2016, Ryanair was the largest European airline by scheduled passengers flown, and carried more international passengers than any other airline. Ryanair operates 420 Boeing 737-800 aircraft, with a single 737-700 used primarily as a charter aircraft, but also as a backup plane and for pilot training. The airline has been characterized by its rapid expansion, a result of the deregulation of the aviation industry in Europe in 1997 and the success of its low-cost business model. Ryanair’s route network serves 34 countries in Europe, Africa (Morocco), and the Middle East (Israel and Jordan).