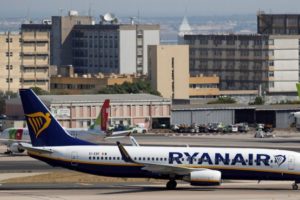 The Irish low-cost airline Ryanair lowered financial targets for 2018, due to labor disputes and higher fuel prices, which will have negative impact on its financial performance.

The low-cost airline has been forced to retreat a little in terms of its financial results for the current fiscal 2018/19 and does not exclude a further reduction in its targets. Regarding the profit, without taking into account the results of its subsidiary Airline Laudamotion, Ryanair expect to be in the range of 1.10-1.20 billion EUR for the year instead of 1.25-1.35 billion EUR in earlier forecast.

Two days of serious strikes in Germany, the Netherlands, Belgium, Spain and Portugal in September lead to lower revenues.

The airline further said that reservations, especially around school holidays in October and Christmas, are less due to passengers’ fears of new flight cancellations. In addition, the rising cost of kerosene is also a burden for the financial performance of Ryanair.

The shares of the airline declined by more than 12%, which is the worst fall in over 2 years.