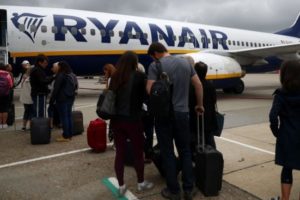 Shares of Ryanair fell to a 4-year low as the airline lowered its annual profit forecast due to lower ticket prices.

The largest low-cost carrier in Europe is already expecting its profit after tax to be in the range of 1.0-1.1 billion EUR, not including its new Lauda division, for the fiscal year to March. By comparison, the previous estimate was for a positive financial result in the range of 1.1-1.2 billion EUR.

The profit of the company is affected by lower ticket prices in the winter, and it is likely to decrease by 7% instead of the originally projected 2%. Even improving costs and larger sales of additional services fail to take precedence.

The main factors affecting the profit of Ryanair are trade unions, adverse weather conditions, and the strikes of air control officials. At the same time, passenger growth is significantly lagging behind that of its rival Wizz Air, which is becoming a growing threat to Ryanair, especially in the Eastern European region.

Chief Executive Officer Michael O’Leary said he was disappointed with the weaker prospects.

However, this is not the first review of Ryanair’s earnings expectations for 2019. In October the forecasts were down 12% on the grounds that labour and fuel costs had a negative effect on the financial result.