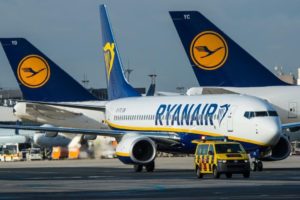 The airline Ryanair opened six-week period of cancellation of part of daily flights, which will affect average 40-50 flights per day. The Irish airline had to take these measures to improve the situation with respect to the flight schedule, the punctuality of which was severely damaged due to a combination of several factors – disruptions in the schedule of pilots’ vacations, the transition to a new vacation year, bad weather and increased load during the summer months.

Europe’s largest low-cost airline Ryanair today canceled 82 flights. In the next six weeks, until the end of October, the airline intends to cancel an average of 40-50 flights per day. With the help of this step, the management of Ryanair is trying to return the airline to work in accordance with the exact schedule, from which it regularly deviated in recent months. By the beginning of September, accuracy throughout the company, including the departure of flights, fell below 80%, while it usually does not fall below 90%.

Decrease in accuracy management is explained by the company with combination of several factors at once, including several strikes by French air traffic controllers and a number of problems with the regulation of air traffic in France, Britain and Germany, as well as difficult weather conditions, such as thunderstorms.

But the main reason is that from next year the airline is moving to a new vacation year. In this regard, in accordance with the strict requirements of Ireland’s labor laws, all the employees of the airline must have time to use their annual leave until the end of the holiday year. At the moment, Ryanair has already accumulated a significant debt on vacation.

The complicated situation with the holidays is also worsened by the volume of work last summer. In July the airline carried 12.6 million passengers, in August – 12.7 million. Many pilots were not allowed to go on vacation and use their paid leave. Now, when the load comes to a relative standard, Ryanair expects to give the pilots a chance to rest.

According to various estimates, the vacation regime of the airline can affect up to 250,000 passengers. Ryanair promises to pay compensation and offer alternative flights and stresses that the abolition will affect only 2% of the airline’s flights, which daily carries up to 2,500 flights. According to the laws of the EU, the passenger has the right to receive compensation in the amount of 250 ЕУР, in case the distance of the canceled flight is up to 1,500 km.