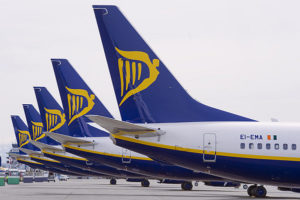 The Irish budgetary air carrier Ryanair placed a non-binding bid for the acquisition of the Italian airline Alitalia, which is under bankruptcy procedure. The Chief Financial Officer of Ryanair, Neil Sorahan, said that he can not provide details. At the same time, he added that the low-coster considers it “important to participate in this process”.

In June, the CEO of Ryanair Michael O’Leary said that if an Irish carrier decides to make an offer to buy an Italian airline, then he will claim a controlling stake. At the same time, he previously said that he would prefer to cooperate with an Italian carrier, rather than buying it.

The Alitalia bankruptcy procedure began in May after the approval of the board of directors was obtained. The carrier then stated exhausted all possibilities for rescue. Prior to this, the company’s plan to withdraw from a difficult financial situation was rejected. The management of the air carrier aimed to recapitalize it, by reduction in salaries and the laying off approximately 1,600 employees.

The Italian government owned 49.9% of the airline’s shares. In 2014, a carrier from the UAE Etihad Airways announced the acquisition of all shares from the government of Italy. The deal amounted to 560 million EUR. The buyer said that intends to invest in the Italian carrier 1.76 billion EUR, expecting that he will make a profit by 2017.