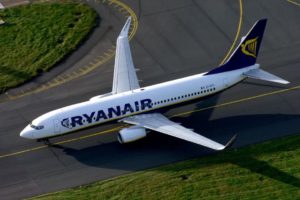 …The low-cost airline Ryanair and its employees, who are protesting in Ireland, have reached a new labor agreement after lengthy talks, which signaled the end of the dispute that has disturbed the summer trips of thousands of passengers across Europe.

Ryanair’s shares rose by more than 4% on the Dublin stock exchange shortly before noon, after the Forsa trade union announced an agreement was reached following 22 hours of negotiations. The deal is to be approved by the pilots as well, and the union will recommend to be accepted.

The agreement in Ireland is seen as key to addressing the airline’s problems with its staff in Europe, because the Irish pilots initiated the demand for a union, pushing for better working conditions. The breakthrough in Ireland was achieved after last night the Dutch cabin crew declared their intentions for a strike demanding better pay and working conditions.

The series of strikes in Europe disturbed the trips of thousands of people and worsened Ryanair’s financial results. The Irish pilots of the company last protested on August 10th, with the strike covering the cabin crew in Germany, Belgium, Sweden and the Netherlands, which led to the cancellation of more than 400 flights.

Ryanair, which flew to 37 countries and carried 130 million passengers last year, prevented a major strike before Christmas, deciding to recognize the unions for the first time in its 32-year history, trying to reach an agreement with them for the first time.

The Irish airline reported a year-on-year increase in its profit, but warned that higher costs would make the year more difficult.

The carrier announced a 10% profit growth for the year by the end of March 31, reaching 1.45 billion EUR. However, the forecasts are negative, as expectations are that profit will shrink by up to 14% in the current financial year to March.