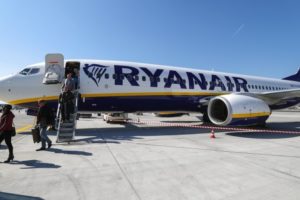 The budget airline Ryanair will pay a total of 70 million EUR or 61.6 million GBP for compensation to its customers for canceled flights in the next six months. The bill also includes the cost of renegotiating the conditions for the company’s pilots. This was confirmed by her management during the presentation of its financial results.

Last month, the company announced that more than 2,000 flights would not be serviced due to lack of pilots. According to later analyzes, Ryanair is struggling to attract and retain personnel.

The compensations for airline customers will cost 25 million EUR or 22 million GBP.

In the words of Executive Director Michael O’Leary, the crisis has prompted the management to take action to ensure more competitive pay for pilots and career development opportunities.

“We will now move on to offering considerably higher (over 20%) pay and better career prospects”, added Michael O’Leary.

Michael O’Leary’s statement came after the airline announced a 7% revenue growth to 4.4 billion EUR and a pre-tax profit of 11% to 1.2 billion EUR.