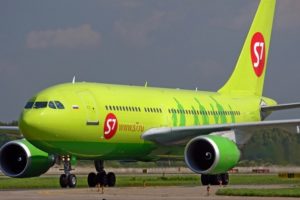 S7 Airlines was awarded for the Russian greenest air carrier by the assessment of the environmental organization Atmosfair. The annual award was presented at the UN conference on climate change in Bonn, Germany.

In its study, Atmosfair estimated the greenhouse gas emissions of more than 200 of the world’s leading airlines. S7 Airlines took the 20th place in the ranking and became the only Russian airline included in the top 50 list. When compiling the rating, the experts took into account the amount of CO2 emissions in tons per passenger kilometer.

“Reducing the negative impact on the environment is an important activity of S7 Airlines. In the development of the air fleet the airline is guided by the latest developments of the world’s leading manufacturers, given the greater efficiency and environmental friendliness of modern aircraft in comparison with previous generation aircraft”, says the report of the airline.

In summer, S7 Airlines was the first among Russian airlines to start operating modern Airbus A320neo airliners with improved environmental performance. Gradually, the aircraft of the renewed family will replace all the Airbus A320 in the park. In addition, S7 Airlines signed a contract for the delivery in 2018 of new airliners Boeing 737 MAX. The company will be the first in Russia to operate a new type of aircraft.

S7 Airlines is an airline headquartered in Ob, Novosibirsk Oblast, Russia, with offices in Moscow. As of 2008, it was Russia’s biggest domestic airline. Its main bases are Domodedovo International Airport and Tolmachevo Airport. S7 Airlines, which is part from the alliance oneworld, has operated scheduled passenger flights to destinations in Russia, as well as international services in Europe, the Middle East and Asia.