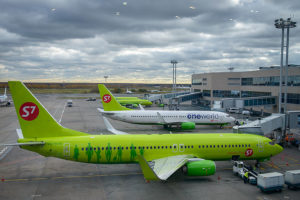 Russian airline S7 Group summed up the results of production activities for April 2019. Over the past month, airlines carried 1.362 million passengers, 19.4% more than in April 2018.

“S7 Airlines has consistently adhered to the strategy of the gradual growth of passenger traffic. Growth on international lines is associated with the launch of flights to new European destinations on the eve of the high summer season. S7 Airlines passengers from St. Petersburg have direct flights to Barcelona, ​​Palma de Mallorca and Olbia, from Moscow to Nice”, said Igor Veretennikov, commercial director of the S7 Group.

The expansion of the route network also contributed to the growth of passenger traffic on domestic routes. Continuing the development of the interregional transportation program, S7 Airlines opened flights from Novosibirsk to Novokuznetsk, and flights to Anapa began from St Petersburg.

S7 Airlines is an airline headquartered in Ob, Novosibirsk Oblast, Russia, with offices in Moscow. Since 2008, it is Russia’s biggest domestic airline, with its main bases at Domodedovo International Airport and Tolmachevo Airport. S7 Airlines operates to almost 150 destinations domestically within Russia and internationally throughout Europe and Asia.