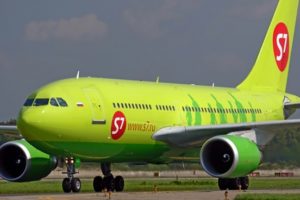 Russian airline S7 Group placed a preliminary application for purchasing of 100 Sukhoi SuperJet 75 aircraft with a capacity of 75 seats. The negotiations for purchasing are in early stage and further financial details must be cleared, but according to exprts from the industry the final order might be submitted by the end of first quarter.

During the Singapore Airshow 2018 the president of the Sukhoi Civil Aircraft, Alexander Ivanovich Rubtsov, said that a few weeks ago, launched a program to create a smaller version of the Sukhoi SuperJet 100, with a capacity of 75 seats (SSJ 75). This aircraft is designed for flights on regional routes with a length of 1,500-2,000 km. Within the scope of the works, the fuselage of the aircraft is to be profoundly recycled, while a new wing and avionics complex will be created. The engine variants for the new aircraft will be domestic PD-7, or foreign manufacturers PW and GE. The plane is planned to be created within 4 years. According to Rubtsov, at the moment negotiations are under way with a large start-up customer.

Reduced SSJ 75 will create for S7 a new segment of business. The airline flies almost everywhere in Russia with a high frequency, and in 2017 leased the Embraer ERJ-170 (78 seats) and entered a new segment of regional transportation.

S7 Airlines, legally PJSC Siberia Airlines, is an airline headquartered in Ob, Novosibirsk Oblast, Russia, with offices in Moscow. As of 2008, it is Russia’s biggest domestic airline.