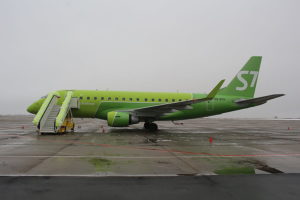 S7 Airlines, a member of the oneworld global aviation alliance, from opens direct daily flights from Moscow to Belgorod from February 1, 2019.

The departure from Moscow Domodedovo Airport will be at 12:45, arrival in Belgorod will be at 14:10. The return flight departs at 14:50 and arrives in Moscow at 16:15. Flights will be carried out on modern Embraer 170 aircraft, designed for 78 seats in a comfortable economy class cabin.

“S7 Airlines continues to develop the network of inter-regional flights on Embraer 170 aircraft. Flight time from Moscow to Belgorod will be about one and a half hours, which business travelers will especially appreciate, as they can conveniently plan business negotiations. In turn, passengers from Belgorod will be able not only to travel quickly and comfortably to the capital but also to make flights with convenient transfers at Domodedovo Airport. For example, with less than three hours, you can go to Munich, Verona, Novosibirsk, Sochi, Kazan, Wall fences and other towns from the S7 Airlines route network”, says the statement of S7 Airlines.

S7 Airlines, legally PJSC Siberia Airlines, is an airline headquartered in Ob, Novosibirsk Oblast, Russia with offices in Moscow. As of 2008, it is Russia’s biggest domestic airline, with its main bases at Domodedovo International Airport and Tolmachevo Airport.