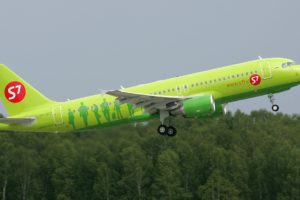 S7 Airlines, a member of the global aviation alliance Oneworld, announces the opening of new flights Moscow – Rome. The air tickets are already on sale.

The direct flights from Moscow Domodedovo airport to Rome will be performed on daily basis daily from December 15, 2017. The departure from Domodedovo will be at 13:25, arrival at the airport Fiumicino at 15:20. The return flight departs from Rome at 16:20 and arrives in Moscow at 22:05. Flights will be carried out on modern comfortable airliners Airbus A320.

“Since December, passengers from Russia will be able easily to make their vacation in Roma with leisurely walks in Villa Borghese and long dinners in a variety of cafes in Trastevere. Rome is the seventh city of Italy on the S7 Airlines flight map. The airline already operates flights to Verona, Genoa, Naples, Pisa, Turin and Catania. Passengers from Rome get an opportunity to go and visit Moscow and continue their journey through the cities of the wide S7 route network with convenient connections at Domodedovo airport”, said the Commercial Director of S7 Group, Igor Veretennikov.

S7 Airlines, legally PJSC Siberia Airlines, is an airline headquartered in Ob, Novosibirsk Oblast, Russia. As of 2008, it was Russia’s biggest domestic airline. Its main bases are Domodedovo International Airport and Tolmachevo Airport.