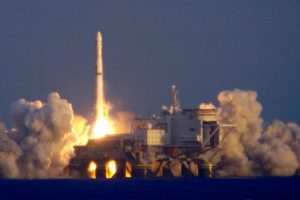 S7 Space, which is part of S7 Group, plans to buy out production facilities for the production of NK-33, NK-45 rocket engines in Samara from UDC United Engine Building Corporation, and resume their production.

“We would like to buy state-known engines NK-33 and NK-43, produced earlier by the Samara plant” Kuznetsov “, as well as documentation, equipment, technical reserve from the state. In general, everything that has remained on this topic from the Soviet program”, said the general Director of S7 Space, Sergey Sopov. This initiative is already being discussed in the government, explained he.

“To resume production of rocket engines, it is necessary to invest 300 million USD. This includes the production of not only NK-33 and NK-43, but also a control system, which we also would like to do on our own”, added he.

In April, S7 Space closed the deal to purchase the floating launch site “Sea Launch”, but so far it does not have a carrier rocket. The company was going to use Russian-Ukrainian Zenit rockets for this purpose and even agreed with aerospace industry company Yuzhmash on the delivery of sets of stages, but the Russian government has not yet issued permits for the supply of components needed to assemble the missile.

Through “five-six years” for launches from the “Sea Launch”, S7 Space plans to use the Soyuz-5 missiles, which are being developed by Roskosmos. Prior to this, S7 Space intends to use available on storage 36 engines NK-33 and NK-43.

“This allows us to begin the flight test program for the new Soyuz-5SL rocket without waiting for the launch of the serial production of the upgraded NK-33 and NK-43”, said Sergey Sopov.

Now the company together with Roskosmos determines the future appearance of these missiles.

“We need a modern medium, we can not afford to invest in the project of yesterday. It should also be attractive economically”, added the CEO of S7 Space.

S7 Space offered RSC Energia to develop a modification of the Soyuz-5SL (Sea Launch), which would have a reusable first stage, a reduced mass and was equipped with other engines. For government needs, for example, for the launch of the Federation ships, Soyuz-5 will be powered by the RD-171 engine. But “it’s impossible to put a stage in it by the Mask method”, explained Sopov the need to invest in his own production of engines.