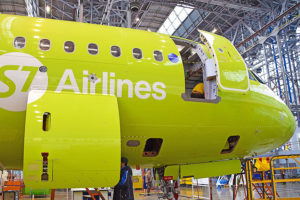 The specialists of the Moscow production site S7 Technics at Domodedovo Airport were the first in Russia and the CIS, who completed the heavy forms of basic technical maintenance (MOT) on the most modern narrow-bodied aircraft Airbus A320neo.

The implementation of the first heavy forms of maintenance on the A320neo involved 25 specialists, including eight with the qualification “B”. The total amount of work was about 5,000 standard hours. It took six days to complete each form.

“As part of personnel training for the implementation of the first heavy forms on the A320neo aircraft in Russia and the CIS, S7 Technics specialists underwent additional training and internship”, said the press service of the lead engineer of S7 Technics.

In the near future, specialists of the S7 Technics production site at the Novosibirsk Tolmachevo Airport will begin to perform heavy forms of maintenance on A320neo aircraft.

“Already, we are starting to prepare for the implementation of heavier forms on this type of aircraft, which are held every six years. They imply extensive checks of the structural elements of the aircraft in accordance with the manufacturer’s recommendations”, adds the statement of S7 Technics.

Airbus A320neo, received European and American certificates such as EASA and FAA in the fall of 2015, is a re-motorized and highly economical version of the A320 family.