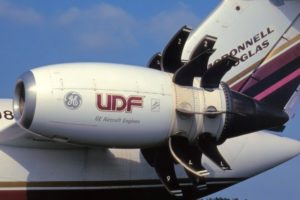 French company Safran started testing a new turbofan jet engine with an open propeller, developed within the Open Rotor project. The tests of the aircraft engine have been held since May 2017, but the company decided to announce this only now. Today, some aviation developers are looking for new technologies and technical solutions that will make passenger planes more economical, and the air travel to be cheaper. One of the ways to make commercial aviation economical is the creation of new aircraft engines or a significant refinement of existing ones.

Tests of the new aircraft engine within Open Rotor project are conducted by Safran. The details of the checks are not disclosed yet, except that they are successful. Open Rotor has been developing since 2008, and the assembly of the first prototype of the power plant Safran has been in operation since November 2015.

After completion of ground tests, a new aircraft engine will be installed on a special suspension in the tail section of the Airbus A340 test liner for flight testing. The parameters of the perspective jet engine are compared with the popular CFM56. It is expected that the carbon dioxide emissions of an open-rotor engine will be 30% lower than that of CFM56.

The prototype of the new propulsion system is assembled on the basis of the gas generator of a turbojet two-loop engine with a forbock camera M88. Such powerplants are used on Rafale fighters. From the shaft unwound by the turbine of the engine, an open rotor with rotors about 420 centimeters in diameter will be driven through the reducer. The fan blades can change the angle of attack. The rotational speed of the rotor is about 800 rpm. For comparison, the fan speed of the CFM56 engine is 5,200 rpm in full power mode. The open-fan engine, developed by Safran, will be able to develop thrust of 111 kilonewtons.

Today, only one turbo-rotor jet engine with an open rotary fan, the D-27, is serially produced in the world. This power unit was developed by the Zaporozhye engineering design bureau Progress. At this power plant the air flow is created by two coaxial multiblade saber-shaped screws. They are driven by a free four-stage turbine through a reducer.