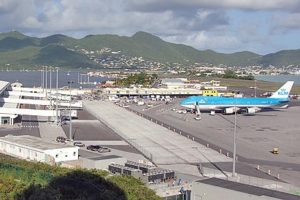 There are two airports on the island of Saint-Martin. Princess Juliana International Airport is one of the largest transport hubs in the Caribbean region, located in the Dutch part of the island. The airport is one of the ten most dangerous airports in the world. In the French part of the island there is also a small airport, through which flights are carried out between the overseas territories of France – Guadeloupe, Martinique and Saint Barthelemy.

“The Dutch airport on the island has been destroyed, but the French airport in the northern part of the island is operating”, said the French Minister of the Interior, Gerard Collomb. He added that the French authorities will send to the affected island “necessary funds” to eliminate the effects of the disaster.

As a result of the hurricane, the French overseas territories were left without electricity. Floods and significant destruction were reported – trees were torn out of the roots, buildings were destroyed, and infrastructure facilities were seriously damaged. At least eight people became victims of the hurricane in the overseas territories of France, and 23 others were injured.

Hurricane Irma on Wednesday hit the overseas communities of Saint Barthelemy and Saint-Martin, part of Guadeloupe – the overseas department of France. According to media reports, the owners of real estate on the French islands in the Caribbean are, in particular, British businessman and founder of the Virgin Group Richard Branson, Russian billionaire Roman Abramovich and other businessmen, as well as eminent actors and singers.

Hurricane Irma has already reached the Category 5, maximum category, it is called the most powerful hurricane in the Atlantic at least for the last decade. The experts believe that it is stronger than the hurricane Harvey, which in late August hit the coast of Texas and led to a catastrophic flood.